Tap size:  9.5" Rarity:  less than 10 seen Mounting:  black 3/8" ferrule on 5/16" anchor bolt This is the tap I was originally trying to obtain from Rebel Mettle but received the Gas Pump tap instead, which I didn't even know existed. Rebel Mettle Brewing owner Mike Brown was kind enough to recognize my mistake and sell me this tap as well, which is known as "Hot Rod", or Rebel Mettle's "Signature" tap. I think it's so cool that the tap is essentially a stack of tires, and I love the way the snake weaves in and out of them. The top features the same brewery logo that the Gas Pump tap does, but it is encased within a tire that sits up vertically. The tire in the middle of the sculpture reads "CIN * USA" in a nod to the brewery's location in Cincinnati, Ohio. The backside features the same top logo and writing on the middle tire, but features a different look due to the snake. The detail is fantastic, from the patterning of the
Post a Comment
Read more 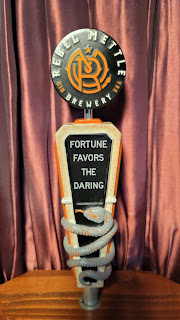 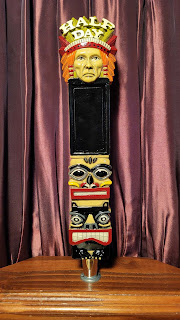 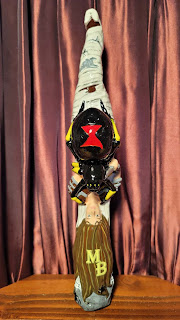 Post a Comment
Older Posts
Welcome to Amazing Tap Handles - The Tap Handle Museum. Here you will find photos of the Museum's collection of beer taps, along with brewery info. Have a look around the Museum, and use the contact form in sidebar to leave me feedback about the site, talk about taps, or if you have a rare tap handle you'd like to sell to the Museum. I'd love to hear from you!

New to the Site? Start Here!

Photos or tap descriptions used in this blog may not be misrepresented as your own. Photos may not be used for financial gain whatsoever, as the uniqueness of the photo would unfairly associate a seller's product and reputation with this site. Tap descriptions may be used word for word as long as this blog is cited as the source, and a link is provided to this site.
Brewery history may not be used for any reason without citing the blog post or original source from which it was taken, and providing a link to such.
Failure to follow the guidelines above is a violation of Copyright Law, which protects original works of ownership.